He came to United States in the summer of 2001 as the Minister of the Vedanta Society of Providence. He is invited to preach Vedanta at different places in the United States. Swami is also the Hindu Religious Affiliate at the Brown University, Providence, RI and the Hindu Chaplain at the University of Massachusetts Dartmouth, MA.

Swami spoke in the chapel on Sunday, January 13. The topic was “The One and Many”.  He stated that we are all seeking what is not changing, is one, permanent. We are drawn towards a fundamental oneness. Everything is one but may also be seen as a combination of many. He used the illustration of a picture from a camera to make his point.  The picture is one. But, as you start to look at the various elements that come together to form the "picture", you will see many, like the flowing river, flowers, grass, mountains, sky and so on, in the picture. He equated this to our life.

In life, desires come and go. At a specific moment in time, we might think the rise of a certain desire is the one and only thing we want. But, over time this desire changes to something else e.g. liking ice cream as kids and growing out of it. So, even the notion of desire, while "ONE", takes on different forms as we grow the most enjoyable moment comes when the object of desire becomes one with us.

Everything in life undergoes change. What never changes is real. For one to rise to the changelessness or aspire for the real, one must change her perception and habits and exercise discipline. The change in perception and habits comes through working on our humility. Vedanta is a practice and service needs to be central to our life. We must all aspire to become one with that changeless entity. The oneness that we should aspire to is pure Love. When the oneness is absent, Love breaks down. Swami used the example of an Ocean to make his point - while the ocean ("ONE") is calm, there are numerous waves ("MANY") that ebb and flow. He then went on to quote from the Upanishad where a man is born again and again finally understands that he and the ONE are the same. So, we must assert to ourselves that we will always be happy and aspire to be with the one while we see many around us.

On Monday, January 14 a group from the Center, including Swami Ishtananda, took Swami Yogatmananda on a trip to Ft. Myers, Florida to visit the Edison & Ford Summer Estate. This was an enjoyable trip for all. The day was spent touring the estate grounds and the museum and having a picnic lunch.

Swami Yogatmananda was introduced by our Swami Ishtananda as sweet in nature, jocular and accommodating. Swami Ishtanandaji spoke of Swami Yogatmananda as a person who is the "right type of monk for the Ramakrishna Order". By the end of the lecture, this became evident to all of us. We enjoyed his company for the three days. This was Swami's third visit to the Center and we look forward to more in the future. 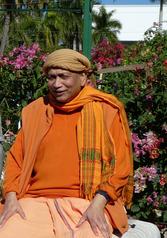