Swami Vedananda, a monk from the Vedanta Society of Northern California in San Francisco, visited our Center the weekend of April 1st and 2nd, 2017. He joined the Ramakrishna Order as a probationer at San Francisco in 1970. He took the first monastic vows in 1980 and final ordination into sannyasa in 1993. He was entrusted with the works of the Society at its’ retreat property located in Olema, Marin County. Apart from his regular talks and classes given at the Society he has also given classes on Upanishads to a study group of students at Stanford University, California for past twelve years. He was deeply involved in the reconstruction of the historic Old Temple of the Society.

Swami was greeted with a reception on Saturday evening, April 1st, in the Panton House. He related to all in attendance some of his experiences with senior monks among whom were disciples of either Holy Mother Sri Sarada Devi or Swami Vivekananda. He also spoke about his residence at the Vedanta Society’s Olema Retreat and the activities he has been involved in.  The reception was followed by Arati hymns and meditation.

Swami gave a lecture Sunday morning, April 2nd, in the chapel at 11:00 AM. The topic was “Vedanta - A Modern Message for Modern Times”. He started the talk by asking us what defines “Modern Times”. He gave a simple definition:

The shrinkage in the time and space continuum. He suggested the rapid nature of innovation and acceptance and then the dependence on the new element. His primary reference was technology and our ability to speak and see people anywhere in the world instantaneously;
Accessibility - humans have now been able to access even the remotest parts of the globe and even space. He used the example of Mt. Everest to suggest that it is almost an outing now.

This should suggest that man has conquered everything. External situations exist but those problems are being solved. Mankind’s basic problem now is psychological - internal, as evidenced by the high death rates due to drugs, suicides and depression.  This is not due to anything exterior. The basic problem is the incomplete understanding of what this existence is all about.

We need to investigate the idea that God is present everywhere, at all times. Swami Vivekananda suggested that we need to solve the problems from the inside. His advice is, “Don’t seek for God, see Him”. The process of spirituality is to find the commonality of everything. The truth we are searching for is around us and within us.

Swami Vedananda quoted from Chandogya Upanishad’s 6th chapter to make his point. Bracelets, necklaces, and ear rings all adorn different parts of the body, but they are still made from the same basic element - gold. Similarly, we are all made from the same Satchitananda (truth, consciousness, bliss), so we should see that God within; find the bliss - that which is within. It is the inner reality of everything.

During Swami’s time in St. Petersburg, he visited some of the local parks and beaches. This was his maiden visit to the Center and we hope he makes a return trip soon. 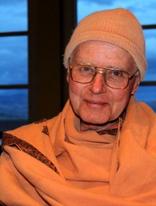