Swami Prasannatmananda, Minister of the Vedanta Society of Berkeley, California joined us the weekend of September 24 & 25, 2016 at the Vedanta Center of St. Petersburg, to commemorate the 150th birthday of Swami Abhedananda.  An informal meeting was held on Saturday evening, September 24, followed by Arati services in the shrine.

Swami spoke on Sunday in the chapel on “Swami Abhedananda: A Born Yogi”. His talk gave us an insight into the life of Swami Abhedananda, a direct disciple of Sri Ramakrishna, and a pioneer of promoting Vedanta in America.

Swami Abhedananda was born in Calcutta on October 2, 1866 (September 24 according to Indian calendar this year).  Before he was born, his mother prayed to the divine mother Kali for a son. After his birth she named him Kaliprasad, meaning blessings of Mother Kali. When he first met with Sri Ramakrishna, he knew Kali belonged to the inner circle of his devotees.

After the passing of the master, under the leadership of Naren, as the young disciples formed a fraternity of monks, Kali was given the name Swami Abhedananda.  After spending some time at the Baranagar monastery he spent the next 10 years travelling throughout India as a mendicant monk.

In 1896, he accepted the call of Swami Vivekananda to join him in London and then a year later he was sent to America to take charge of the newly founded Vedanta Society of New York.  He spent the next 25 years preaching the message of Vedanta and the teachings of Sri Ramakrishna there. He lectured extensively throughout the United States and abroad. His oratorical talents, scholarship and intellectual powers made him so popular in New York City that he had to deliver ninety lectures at the Mott Memorial Hall to satisfy the public demand.

Swami returned to India in 1921 and in 1922 he embarked on a journey through Kashmir and Tibet where he studied Buddhist philosophy and monasticism.  In 1923 after returning from Tibet he founded the Ramakrishna Vedanta Ashrama in Calcutta.

Swami Abhedananda passed away on September 8, 1939 at the Ashrama. At the time of his death, he was the last surviving disciple of Sri Ramakrishna. Towards the end of his life, Swami told his disciples, “Have self-confidence. Have faith in yourself. Think – I am a child of Immortal Bliss. The infinite power is playing within me. If you have this conviction, you will conquer the world.”

This was Swami Prasannatmananda’s second visit to the Vedanta Center and we look forward to seeing him again. 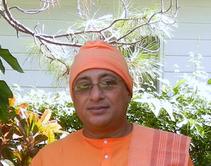