Swami Nirakarananda, a monk of the Ramakrishna Order of India from the Vedanta Society of St. Louis, was a guest of the Vedanta Center of St. Petersburg from Friday, December 6, to Tuesday, December 10, 2019.  Swami gave a lecture on The Mind and Its Control in the chapel on Sunday, December 8, 2019, at 11:00 AM.

Born in Argentina and growing up there, Swami Nirakarananda became interested in Vedanta when he was a student. He became a frequent visitor of the Ramakrishna Ashrama of Buenos Aires and came in contact with Swami Paratparananda Maharaj there.  Later he traveled to Hyderabad, India to receive initiation from Swami Ranganathananda Maharaj and joined the Ramakrishna Order in England in 1993. After completion of two years of formal Brahmachari Training period at Belur Math he received his first monastic vows in 2001.  He was ordained a monk in 2006 after he received the final monastic vows from Swami Gahanananda Maharaj.

He served the Organization at Mysore, India for four years before he was sent to the Vedanta Society of St Louis in 2007. He is trained in the formal worship in the tradition of Ramakrishna Mission.

Swami Nirakarananda’s talk was mostly based upon the classical textbook of Yoga i.e. ‘Yoga Suta’ of Patanjali. He pointed out that mind control was essential for human evolution. Mankind has progressed from the purely physical realm as cavemen to the intellectual realm to be fit for the realm of pure consciousness. To get there, our focus needs to grow from the external world to a focus on our thoughts. Swami, then, explained how one brings focus to one’s thoughts. His talk was rich in content, easy to follow, and made for the masses with interesting anecdotes.

After the service, lunch was served in the Center’s garden. The weather was perfect for outdoor event.  This was Swami’s second visit to the Center and was appreciated by all.

The Mind and Its Control 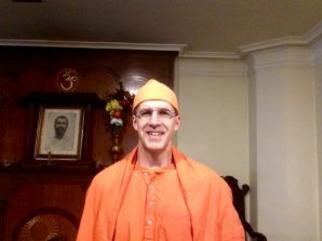