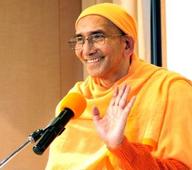 Swami gave a talk on Wednesday evening, June 21, 2017, in the Chapel of the Center. The talk was titled “Vedanta in Japan”. Swami began his talk by giving a brief background of religion in Japan. The culture had been influenced by China and India. The native religion was Shinto, which comprised of three facets; worship of nature, worship of the emperor as the living embodiment of God, and worship of ancestors. Buddhism was introduced into Japan from India by way of Korea and China.

Throughout the centuries Buddhism was the main religion in Japan until the late 1800’s when Shintoism again took hold due to colonization and modernization. Buddhism at this point became diluted and lost its position. Buddhists were subjected to severe pressure and humiliation by the government and its most zealous supporters. Buddhist monks, who had lived lives of celibacy according to monastic traditions, were forced to marry in order to bring them in line with the practices of Shinto priests. The properties of Buddhist temples and monasteries were confiscated, temples were demolished and their scriptures burnt.

This is roughly the religious backdrop of Japan towards the end of the 19th century, when Swami Vivekananda made a brief stop-over and visited some of its important cities on his way to the Parliament of Religions in the USA in 1893. He probably did not give a formal lecture on Vedanta at that time.  Swamiji was impressed by such positive qualities of the Japanese character as patriotism, hard work, power of assimilation, cleanliness and aesthetic sense, to name but a few. When Swamiji went back to India, he encouraged the young men of his country to visit Japan.

When the President of the Ramakrishna Order, Swami Ranganathanandaji, visited Japan in 1958 on a lecture tour sponsored by the Indian government, he inspired a few to form a society to study and preach the ideas of Vedanta and Ramakrishna-Vivekananda. On May 2, 1959, the Society was formally inaugurated by Swami Nikhilanandaji, head of the Ramakrishna-Vivekananda Center of New York on his way back to New York from India, at a public meeting.

Revered Swami Bhuteshananda Maharaj, the 12th President of Ramakrishna Mission paid several visits to Japan and initiated many spiritual aspirants there. He was highly loved by a large number of Japanese devotees and Vedanta students. Swami Bhaskarananda of Seattle continued to pay annual visits to the Society for many years until it became an official branch of the Ramakrishna Order.

In 1984, the Vedanta Society of Japan officially became a branch of the Ramakrishna Math and Mission. Swami Medhasananda has been the minister in charge since 1993. Since this coincided with 100 years since Swami Vivekananda visited Japan a celebration was held to honor the occasion which was well attended. Spiritual programs, evening meditations, birthday celebrations of the Holy Trio are all held during the year. At least 42 books on Ramakrishna-Vivekananda-Vedanta literature have been published in Japanese.

Ever since his arriving in Japan he has actively been spreading the message of Vedanta in different islands of that country and outside Japan also.  His initiative was responsible in starting a Vedanta Society recently in the Philippines.

The evening concluded with a beautiful performance by Yoshiko Carlton, a well-known Japanese Koto musician. A native of Kagoshima, Japan, she started her Koto training at the age of nine and continued after moving to the United States. To educate the community about the beauty and history of Koto Yoshiko often gives lectures and demonstrations at schools and museums, including the Morikami Museum and Japanese Gardens in Delray Beach. In 2003, she was awarded a certificate of recognition by the Consulate General of Japan in Miami for her contribution in promoting Japanese culture, especially Koto, to the community. In 1995 Yoshiko established the South Florida Branch of the Washington Toho Koto Society then in 2002 she established Friends of Koto in Orlando.

This was Swami’s second visit to the Center. We are grateful to be able to welcome him again and enjoyed spending time with him.