Ramakrishna Math and Ramakrishna Mission are twin organizations which form the core of a worldwide spiritual movement (known as Ramakrishna Movement or Vedanta Movement), which aims at the harmony of religions, harmony of the East and the West, harmony of the ancient and the modern, spiritual fulfillment, all-round development of human faculties, social equality, and peace for all humanity, without any distinctions of creed, caste, race or nationality.

RAMAKRISHNA MATH is a monastic organization for men brought into existence by Sri Ramakrishna (1836 -1886), the great 19th century saint of Bengal who is regarded as the Prophet of the Modern Age.

RAMAKRISHNA MISSION is a registered society in which monks of Ramakrishna Math and lay devotees cooperate in conducting various types of social service mainly in India. It was founded by Sri Ramakrishna's chief apostle, Swami Vivekananda (1863-1902), one of the foremost thinkers and religious leaders of the present age, who is regarded as 'one of the main moulders of the modern world', in the words of an eminent Western scholar A.L. Basham. Although Ramakrishna Math and Ramakrishna Mission are legally and financially separate, they are closely inter-related in several other ways, and are to be regarded as twin organizations.

The main goals and objectives of these twin organizations, based on the principles of Practical Vedanta, are :

- To spread the idea of the potential divinity of every being and how to manifest it through every action
and thought.

- To spread the idea of harmony of religions based on Sri Ramakrishna's experience that all religions lead to
the realization of the same Reality known by different names in different religions.The Mission honours and
reveres the founders of all world religions such as Buddha, Christ and Mohammed.

- To treat all work as worship, and service to man as service to God.

- To work for the all-round welfare of humanity, especially for the uplift of the poor and the downtrodden.

- To develop harmonious personalities by the combined practice of Jnana, Bhakti, Yoga and Karma.

The motto of Ramakrishna Math and Ramakrishna Mission is:
Atmano mokshartham jagad hitaya cha,
"For one's own salvation, and for the welfare of the world". 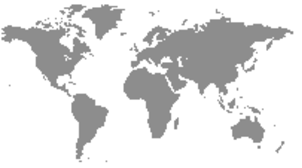 The Math and the Mission together have 172 branch centres all over India and in different parts of the world.