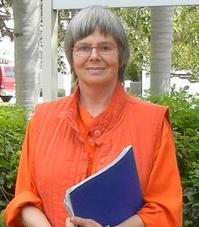 Pravrajika Gitaprana, minister in residence of Vivekananda Retreat, Ridgeley, New York, will be visiting the Vedanta Center of St. Petersburg in January, 2020. She will be our guest speaker on Sunday, January 26, 2020. The topic will be Freedom That Matters.

Pravrajika Gitaprana grew up in Berkeley, California and was fortunate to be in close contact with her aunt, Mrs. Dorothy Madison, a student of Swami Ashokananda of Vedanta Society of Northern California, San Francisco, who introduced her at a tender age to the Swamis of the Vedanta Society, Berkeley. Afterwards she came in contact with another illustrious monk of the Ramakrishna Order, Swami Swananda, then Minister of the Vedanta Society of Berkeley, who influenced her deeply in monastic life.  Her interest in Eastern Philosophy and religion continued to grow as she studied Sanskrit and Vedic chanting under the tutelage of her Aunt Dorothy.

She joined the convent in Vedanta Society of Southern California, Hollywood, California in 1984 to be near her Guru Swami Swahananda.  She served there for twenty years before being sent to the Vivekananda Retreat at Ridgeley, New York. She is well trained in various Pujas, and in the art of singing and chanting.

She has visited the Center many times and we look forward to seeing her again.