A Brief History
“The opening of this beautiful new Center in 1959 fulfilled a far-reaching religious ideal. With every
detail – its luxurious tropical setting, its majestic palms overlooking Tampa Bay, its modern
air-conditioned temple, its gracious class and meeting rooms – it offers unique haven to
serious seekers.”
The above was from the first bulletin announcing the opening of the new Center at 216 – 19th Ave. SE.

In 1951, Rev. Malcolm McBride Panton came from New York to
St. Petersburg with his wife Earnly to become the Minister at the
Church of Spiritual Philosophy, located in the south side of the
city, near the present location.  Both were disciples of
Swami Nikhilananda of the Ramakrishna-Vivekananda Center
of New York, and used to attend the classes held by
Swami Nikhilananda regularly at the New York Center. They were
highly accomplished people when they arrived at
St. Petersburg and were respected by many. Among other
accomplishments Earnly was a fine artist, and Malcolm was an
advertising copy writer at the New York Times and art critic for the
New Yorker Magazine.

A separate initiative in the mid 1980’s was made by late Swami Bhashyananda of Vivekananda Vedanta
Society, Chicago to start a Vedanta Society in South Florida. A condominium in West Palm Beach was
donated by a devotee, and monks (including Swami Sarveshananda, Swami Yogeshananda and Swami
Varadananda) were sent by him to conduct regular classes.   But that attempt at starting a Vedanta
center was short lived and St. Petersburg became the only official center of the Order in the east coast
of United States south of Maryland.

The Vedanta Center of Saint Petersburg, Florida, is the newest branch outside India of the Ramakrishna
Order. Officially started in May 2006 it became the fourteenth branch of the Order in North America.
The Center is located in the beautiful Old Southeast neighborhood of the city and is situated on its own
one acre property, one-half block from Tampa Bay and surrounded by lovely landscaped grounds and
gardens with varieties of fragrant flowers: oleanders, hibiscus, azalea, wisteria, jasmine, and beautiful
tropical trees such as magnolia, mango, pine, oak and varieties of palm. The Center is especially proud
if its large collection of Bel Trees spread throughout the gardens.

After the death of Rev. Panton in 1976 and Mrs. Panton in 1983, Swami
Adiswarananda, who became the minister in charge of the
Ramakrishna-Vivekananda Center in New York, became the de facto
spiritual leader of the congregation.  The small group of dedicated
followers, several of whom were his disciples, continued to maintain
the regular services of the center under his direction. Also, they
approached the Ramakrishna Mission with prayer that the center be
accredited as a branch of the Order. Their prayer was granted finally
after 23 years of wait.  Meanwhile many illustrious monks of Ramakrishna
Order continued to visit the center, which included Swamis
Ranganathananda, Gahanananda, Atmasthananda, and Smaranananda
Maharaj. The General Secretary of the Order, Swami Prabhananda
Maharaj, and most of the heads of centers of North America and Europe,
both past and present, have visited the center since. 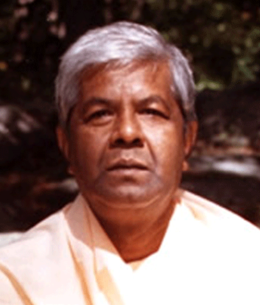 The bulletin continued: “There is a ‘highest common factor’ wherein all the Religions of Humanity meet and
become one. It has been named variously “The Eternal Gospel”, “The Perennial Philosophy”, etc. The
name is unimportant: ancient sages of India long ago observed, “Truth is one, Humanity calls it by many
names”. To this highest Truth, this new Center is dedicated.”

“The purpose of this Center is to stimulate the growth of spiritual understanding through all pathways, in
order that each individual may, to paraphrase Saint Paul, be “transformed in the renewing of his or her mind”,
and so more fully realize his or her innate at-one-ment with God. To advance this end, the teachings of
Vedanta are offered, especially as illustrated and made dynamic in modern times by Sri Ramakrishna and
his disciple Swami Vivekananda of India. Vedanta reveals the underlying harmony of all religions and
philosophies, all arts and sciences, and points out that they are different approaches to one and the same
Reality. It proclaims the potential divinity of all men and women,
which is to be manifested through appropriate spiritual disciplines.”

Rev. Panton relocated his church to the present neighborhood in 1958 and changed its name to the
Church of Spiritual Philosophy and Vedanta Center.  All his lectures and classes drew inspiration
from Vedanta in general and Sri Ramakrishna in particular.  During this time Swami Nikhilananda was an
inspiration to them. 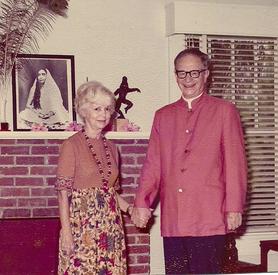